Rehearsal for My First Show on November 10 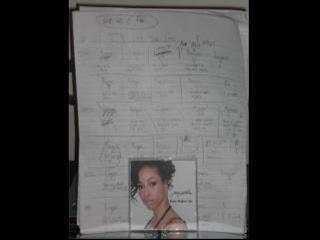 David Berry and I have been working really hard to prepare for my show on November 10th! We've been rehearsing since October and have met for hours at a time preparing. David Berry is a talented pianist who will be accompanying me during the show. He is actually getting his Ph.D. in Classical Piano at Julliard. He has a great musical ear and he is very patient. He is also the musical director at All Angels Church in Manhattan. He has been a real blessing for me in this whole process. I actually found him through Craigslist (big-up to Craigslist! :) Although there are a lot of spam and crazies on Craigslists, sometimes you will find a real gem. David is exactly that.

I decided to do a show because I really wanted to have a chance to perform solo at a club. I have been performing all of my life and throughout NYC, but I have never performed my own set at a night club. I have mostly performed for other venues who were putting on their own productions and shows. I originally wanted to pull a whole band together to perform shows in the city, but it was too cumbersome to have a full band. Summer of 2007, I had tried to pull together a small band with a guitar player, bass player, and drummer, but even that fell through eventually. The bass player moved back to Israel and it was hard to replace him. I was trying to find band members who would play for me for free and split show money. However, when musicians are not getting paid, they are not as dedicated to the group and they have their own agenda and ideas for the group. It just got really messy and eventually I scrapped the idea.

The coordinator of LIFEbeat, Erika Banks, told me that she did a solo show with a pianist over the Summer. I wasn't even aware that there were many shows in NYC with solely piano and voice....I had just assumed that most shows consisted of a full band. Once I heard how successful her show was with just her singing and a pianist playing, I was convinced that I could do the same. So far, it has been a wonderful process. David is such a great player and in the spots where I am not singing, he makes up for it with the music. I picked songs that I could sing well without background vocals. I must say, that is the most difficult part of the process, singing songs with no background support. It really helps to take some of the work off the lead singer and have the background vocals pick up some of the slack. However, it is great practice to entertain a crowd with just my voice.

The picture above is the chord chart of my song, "I'll let you go" that we are going to perform on Tuesday. So that you can get a taste of what my show is going to sound like, I have uploaded the song "Greatest Love of All" from our rehearsal last week. I recorded the song on my mini recorder, so the quality is not the best, but you should be able to get a good idea of the song. I'm also going to post pictures and videos of the show after the show next week. If you're in NYC, I hope you can make it. If not, definitely look for pictures and videos next week!