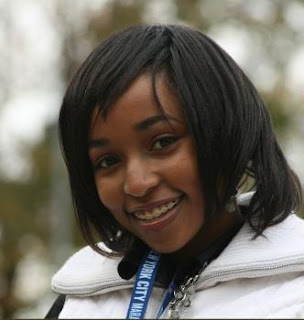 Performing at the NYC Marathon on November 1st was a lot of fun!! The night before, I went to a Halloween party in Harlem, not too far from where I lived. Although I knew that I had to sing in the morning, I still wanted to take advantage of Halloween being on a Saturday. The Saturday night parties were bountiful! And it was even better to have an extra hour to party, since it was Daylight's Savings Time at 2pm on November 1st. So I had to take advantage. For Halloween this year, I was dressed up as Diana Ross. I had a gold dress and gold shoes and a cute wig. I'll post a picture of me in the next blog.

That Sunday morning, I had to wake up semi-early to get ready. I needed to be at the location at 125th and 1st avenue at 9:30am, but it wasn't far from where I lived. There was a forecast of rain in the morning, so the coodinators of the marathon said that we could come out after the rain ended to avoid destroying our equipment. I arrived at the location around 10am. However, it was so hard to get there! A lot of the streets were blocked off and as a result, there was a lot of traffic. We finally got on the FDR to the location. Once we got there, it was relatively easy to find parking and access the location. I had my volunteer badge and permit ready in case there was any trouble!

The location was basically the street where the runners were going to pass me. It wasn't a sectioned off area or nook. I set my equipment, an amplifier, microphone, and ipod, up behind where the onlookers were going to be. When I started performing, the people waiting for the runners started to get interested in me. One man who was part of the FDNY asked if I had auditioned for American Idol. I can't count the number of times people have asked me that!! It's a compliment though because they believe in my talent enough to make it on that show. A couple other people were interested in who I was as an artist, and some people were dancing to my music. I kept the show short, to about 30 minutes at a time. I would sing a couple of songs, and then pause, then a couple more. In the beginning of the marathon, a few people would run by at a time, so I sang when they were close to us. I decided not to sing for an extended period of time in the beginning. I was able to see the professional women and men athletes run in the morning. They were surrounded by cops and media. It was interesting seeing them and then seeing who actually won. There were so many runners who came after them! It seemed like a neverending number of runners. It was amazing seeing so many people run the 26.2 miles! I could never run that many miles at one time!

It was a great experience being at the marathon and being able to say that I performed for so many hardworking people. Running the marathon is a real feat, but performing there was even better for me!