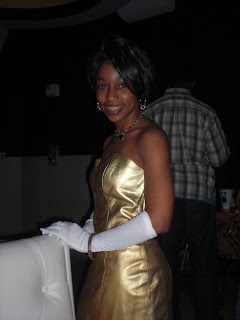 For Halloween this year, I tried to dress up as a Dreamgirl. However, everyone swore I looked like Diana Ross, so I decided to tell everyone I dressed up as Diana Ross. A choir member from my church gave me a gold dress that she used to wear back in the day with gold shoes to match, so I thought it would be great to dress it up for Halloween. I had actually auditioned for the Dreamgirls Broadway show in this same outfit, with the wig and everything. It was a lot of fun wearing this outfit, because I would never have another opportunity to wear an outfit like it and not look wacky!

LIFEbeat had their annual Volunteer Appreciation Party on October 27th. I had a great time there! I went to it last year, but I didn't dress up then. When I went last year, a lot of other people were dressed up in really cool outfits. One couple was dressed up as Huggies Kisses, with full aluminum foil outfits. I felt really out of place, so I wanted to make sure that I dressed up this year. There was a really good turnout of people at this event. There must have been a least a hundred people. There were a lot less people who dressed up, but there were a couple of really good outfits. One couple dressed up as Marilyn Monroe and JFK. There was also really great free food served. There were hor d'oeuvres throughout the event: coconut shrimp, pigs in a blanket, and chicken sticks. I made sure to be first in line each time the waiters came out! There was also an open bar of champagne provided by Barefoot Bubbly and dance music provided by DJ Boo. We were all jammin' to Michael Jackson and some people were even breaking out the Thriller dance!

LIFEbeat also presented the Hearts and Voices Rock Star Artist award to me for this year. I was really happy to receive the award. They cited the work that I did with the NY AIDS Walk 2009 and with "Keep Walkin' On" as the reason why I won the award this year. It was nice getting recognized for doing something positive. I hope to continue to help others and make an impact in this way in the future.