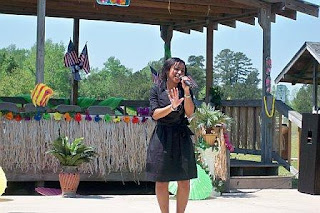 The Greenevers Parade in April was a blast!! I was really happy to see my family and friends and the actual parade was a lot of fun. I grew up watching the parade as a child and always wished that I could be in one of the cars along the route. I finally got that chance! I was posted up in a really nice and brand new car with a driver and I waved all the way from the beginning to the end. It was interesting looking at all of the faces and expressions. Some people were curious, some were just really excited. There were many other cool participants in the parade. There were the winners of the Miss Greenevers pageant, the Mayor, the actual firemen, men on horses, and other groups of people. They really publicized the event and featured me in their newspaper as the main entertainment. There must have been hundreds of people there. There was a lot of candy being thrown out as well. The day started out a little cool, but then it heated up really fast. Once we got near my performance, it was already really hot and muggy. I also debuted "Keep Walkin' On" for the first time live. It was really a hit! Everybody enjoyed it and started to sing a long! I definitely want to be involved with the community again. They showed me so much love and support!
Posted by Jami Jackson at 8:51 PM