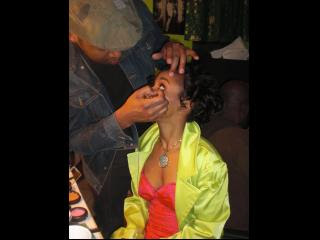 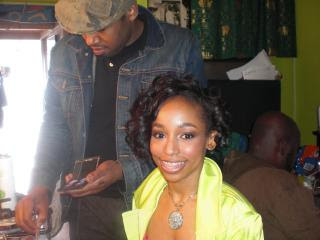 I had so much fun during the photo shoot on March 31st!! I never met Hosea Johnson before that day, but we instantly clicked. He is so down to earth and cool. We were talking about religion, he's a Buddhist, I'm a Christian. He knows someone that went to Columbia University who is also my friend, who also happens to be a Buddhist. We ended up pushing the photo shoot back from 10am to 11am because he was just getting in the night before from traveling from another shoot. I was rushing anyway so I was glad to not have to go in a 10am. I wanted to make sure that I had everything I needed: shoes, nails done, materials for the Lifebeat show after. I didn't get to do my nails though :( I was counting on a nail shop down the street from me, but it was closed! I was so shocked to see it closed on a Tuesday morning at 10am. Aren't nail salons open during the day? Hosea lives in Harlem, so I figured that I would go to a nail salon on 125th street, but I couldn't find one there either! Of all the places NOT to find a nail salon, it was on 125th street. Figures that would happen to me, something would not go right. I tried to pre-plan for the shoot and everything. I went and got my eyebrows done the week before by Eliza's Eyes because I really wanted my eyebrows to be on point. I did get to paint my nails that morning, so I was happy about that. I am a piano player, so I don't ever really wear tips on my nails because my nails have to be short to play. And I hate wearing tips because after about 2 weeks, my nails start to hurt and when I take them off, my natural nails are so weak and damaged. And my nails break enough as it is. So in the end, it's more natural for me to have painted nails, than to go to a salon and get tips. So I guess it worked out. But I was still upset!

The hair/make-up stylist, Trevis Lester, and fashion stylist, Debra Ginyard, were really seasoned professionals. I hadn't had a chance to see what the Debra had in store for me and she never measured me before. I had measured myself and gave her my measurements, but I wasn't sure if I did it right. So I was really happy to see that the clothes fit for the most part and that she had some cute stuff for me to wear. She also brought a lot of extra clothes which was good because some of the stuff she brought was definitely not a go for me. I also liked that she had a lot of assessories and brought extra shoes. So I was really happy with her. She has a way of putting together "cheap" and expensive items to make an outfit really look chic.

The Trevis was also really great. I loved all of the colors that he put on me. He really made my face pop out in the pictures and he made sure to match my clothes. He was very detailed with the application as well. He applied and re-applied and applied again make-up until it was just right. He also used his hands a lot to put the make-up onwhich was nice because it helped with the mixing. He just made a special effort to get it perfect. I wasn't sure what I wanted out of the make-up, but he definitely hit it on the nail. He would also apply make-up while I was waiting to take pictures and re-adjust my hair. Debra would do the same with the clothes. It was just fun being the center of attention!

It was hard for me though to actually take the pictures. Hosea would ask me to keep
Posted by Jami Jackson at 8:45 PM

The above 10 details 1xbet about casinos assist you to perceive the world of gambling. Some gamblers agree to add an additional guess for $1, however not everyone considers the house edge proportion of such bets much higher. Keno is a sport with the very best house on line casino edge and a slow-play principle. The company is continually improving its games and shopping for other firms. Pragmatik bought Extreme Live Gaming and improved its merchandise.