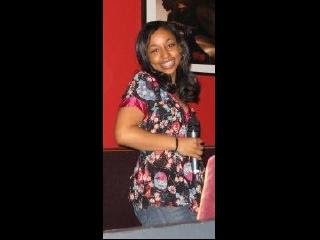 Today I participated in the Easter Sunday service at my church. It was a really great service!! There were so many people! I actually saw Tyra Banks there as well! It was really cool to see her in the pews worshiping at our church. We actually ran out of wine during the communion and so some of the members had to go in the back and get more wine to pass out. I sang 2 solos during the service, the beginning of a song called, "Easter Gloria" and "Redeemer" by Nicole Mullen. Redeemer was a big hit!! A lot of people really enjoyed the song!! I was happy to be able to minister to such a large crowd. The service ran longer than usual, it was about 1.5 hours when usually it is a little over an hour. We ran through a lot of songs, in addition to the "Halelluyah" chorus by Handel. The only thing about today was that it was very cold outside! I had on a bright dress that I wore for Easter, but I didn't dress warm enough and I was just about freezing!

I had dinner with my boyfriend's family and his aunt was saying that during her church service, someone stole a fur coat of one of the members!! And this apparently wasn't the first time! They stole the coat right underneath the seat of the owner. I just couldn't believe someone would stoop so low to steal in a church, let alone on Easter Sunday. That goes to show you just how desperate people are nowadays. You really have to watch your belongings wherever you are. Nothing is safe anymore!