Balloon Boy Story of the Day and Choir Rehearsal 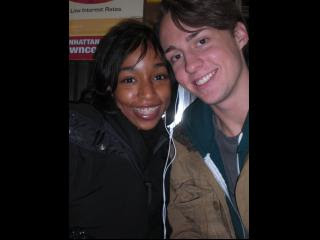 The story of the day today was the 6 year old boy who was thought to be caught in a homemade balloon flying craft earlier this afternoon. It was such a bizarre story to hear about! I was very surprised to hear that a family had built this large aircraft from scratch - it was a 5 foot high and 20 foot long object. There was footage online of the balloon flying 50 miles in the air because everyone thought the boy was still in it. The sibling of the boy said that the boy took off inside the balloon in their house. Longmont, Colorado had to shut down one of their busiest airports to help save the boy and even the military got involved. The Colorado Army National Guard sent a UH-58 Kiowa helicopter and was going to send a Black Hawk UH-60 to try to rescue the boy. They also were working with pilots of ultralight aircraft on the possibility of putting weights on the homemade craft to weigh it down. An operation of this sort is not free; apparently the the Black Hawk helicopter was in the air for nearly three hours and the Kiowa helicopter was airborne for about one hour. The Black Hawk costs about $4,600 an hour to fly, and the Kiowa is $700 an hour. All of this media attention and cost came down to the boy being home the whole time. I was very relieved to find out that he was alive and safe. He ended up hiding in a cardboard box in the garage because his father had yelled at him earlier and for getting in the compartment earlier. It was such a wacky story, but I'm glad it ended well.

I also had choir rehearsal today at First Presbyterian Church. We sang "Jordan's Angels", "The Clouds' Mist", and "Halleluyah". We also sang Kirk Franklin's "My Life, My Love, My All". "My Life, My Love, My All" is one of my favorite songs of Kirk Franklin's. I especially love singing the alto part. I am a soprano, but the alto part of this song is particularly beautiful. It adds such nice harmony to the song. The words are also very simple, but easy to relate to. I love a lot of Kirk Franklin's music because of his choir and the words of his songs. My favorite song of his song, "Now Behold The Lamb". It's a Christmas song, but I can hear it any time of the year. I love the piano in the beginning of the song and the lead singer who begins sings with so much feeling. It quickly gets me into the Christmas spirit!

Overall, choir rehearsal was good tonight. We got through a lot of the music that we wanted to do. We are planning to go out for karaoke tomorrow at Duets. I'm going to take pictures because it's going to be a lot of fun! I'll post pictures in the next blog post.