I had such a great time singing for the USTA Eastern's Father's Day Family Grassroots Challenge!! I had to get up really early in the morning to prepare. I got up at 5:30am in order to get ready to sing later. I was planning to sing around 8am, but it ended up being around 9am. Everything was so hectic; the tech crew was still looking for the mic around 8:30am, the players were still gathering together to meet for the opening ceremony, and everything had to be in place to start the opening ceremony.

The USTA Billie Jean King National Tennis center, where tennis greats such as Venus and Serena have played, is such a huge place that the coordinators had to have walkie-talkies just to get around. Even with these devices, it was still hard to communicate. I had been practicing the National Anthem for the past few weeks before the event. I practiced for so long because I forgot about how difficult the song is!! I had sang the National Anthem at other sporting events in the past felt very comfortable with the song, however, I needed to brush up on a few parts of the song. I decided to sing the song in the Key of G, which gets up to a high D. I'm a belter, so I had to belt out that high D multiple times and that takes practice!! However, on Saturday, it went well and there were no issues. Everyone loved my rendition of the song. I don't think people were expecting such a strong voice from someone like me that early in the morning - I blew them away!! The event coordinators recorded the whole ceremony! See the video here:
[youtube=http://www.youtube.com/watch?v=SE1BYdxcXPY&hl=en_US&feature=player_embedded&version=3]

I was a little nervous that the whole event was going to be cancelled because on Thursday night, the weather had forecast rain all weekend long and the event coordinators were starting to think about cancelling. However, on Friday they decided to go forward with the event and see what happens. It was clear that morning when I sang the National Anthem, but later that afternoon, it did start to rain. It's too bad it rained because it was an outdoor event where parents and children played against each other in tennis. I hope that they had enough time to enjoy the tournament before the rain started.

It was also really nice to see Michelle Paterson, the Governor David Paterson's wife, speak during the opening ceremony. She spoke about her platform on the importance of leading healthy lives through physical activity. She had her bodyguards there of course, but her demeaner was very approachable and sincere. It was nice being able to share the stage with someone like her! 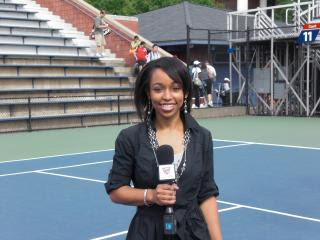